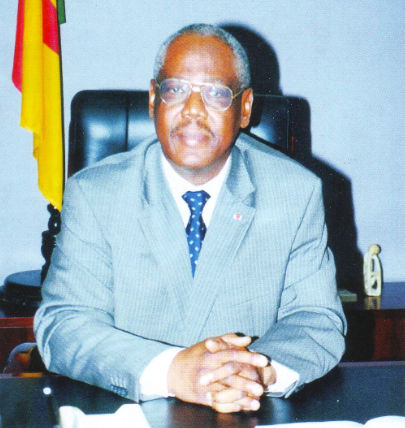 A former Seminarian at St Therese of  Mvolye in Yaounde, he is a holder of a Baccalaureat in Philsophy and Letters obtained from confessional education, and his desire was to specialize in the teaching profession.This helped him enroll into the Higher Teachers Training College of Cameroon,  graduating as a teacher, with his first posting to Maroua in the Far North Region of Cameroon in 1975, before being appointed a year later as Attaché to the cabinet of the President the Economic and Social Council.

In 1978, he was appointed as Attaché at the Presidency of the Republic, and later appointed as Officer in charge of Special Duties in1982. It is in this position that he gathered a lot of experience which enabled him to serve efficiently as Secretary General of the Ministry of Public Health for 10 years counting from 1989 and later at the Ministry of Technical and Scientific Research.

As he kept moving steadily to higher positions, he was appointed as Secretary of State in charge of Roads at the Ministry of Public Works in 1997 and later as Minister of Public Service and Administrative Reform in 2006.

Following the reelection of President Biya in 2011, he was appointed Minister of Mines, Industry and Technological Development, duties that he has been discharging rather satisfactorily as testified by the rapid development of mining projects in the country.

The Private Secretary to the Minister of Mines:

The National Mining Corporation (SONAMINES) created by the President of the Republic 15 December 2020
9 billion 496 million CFA francs of budget for 2021 3 December 2020
International public call for expressions of interest for the financing, development, equipment, operation and management of the Ouassa-Baboute, industrial reference technology park (technopôle) 12 November 2020
Draft Program of the Annual Conference January 16th and 17th 2020 13 January 2020
Annual conference of central and devolved services of MINMIDT extended to affiliated bodies january 16th and 17th 2020 11 January 2020
Concept Note: Discovery of over 300 new mineral occurrences and the 3rd Edition of Cameroon International Investment Mining & Exhibition Conference (CIMEC 2019 -2nd to 4th September 2019) 17 June 2019
Audience granted by the MINMIDT to the Director General of African Intellectual Property Rights Organization OAPI. May 8, 2019
Signing of a petroleum contract for hydrocarbons exploration on Bomana block 23 February 2019
Program of the annual conference 2018 23 January 2019
International Call for Expression of Interest for the granting of mining titles on the rutile block of Akonolinga, 29 October 2018